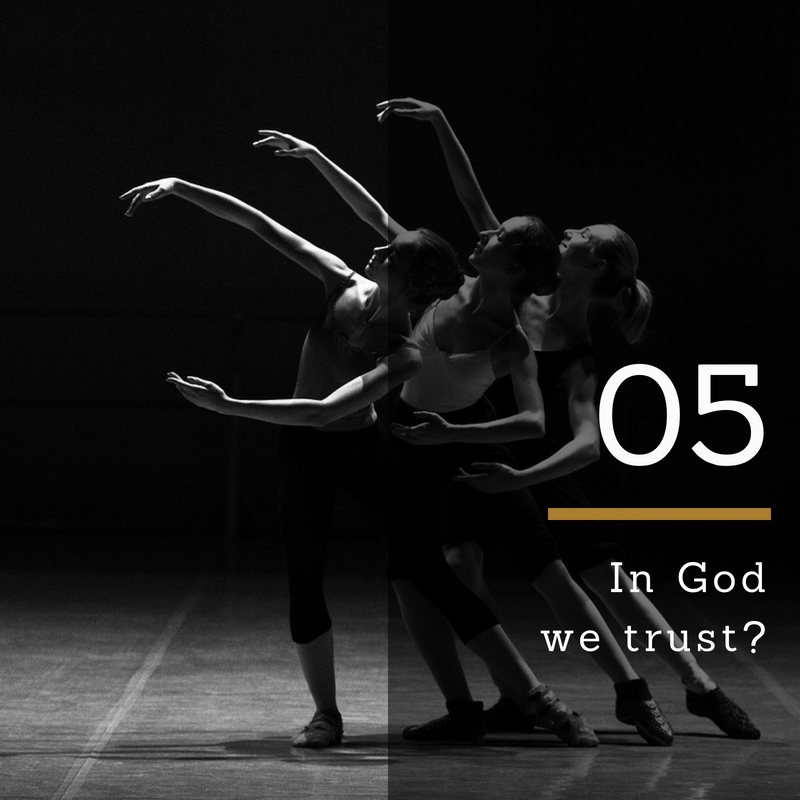 Episode 5:
In God we trust?
Experiencing harmony between faith, art, and career requires trust. Marlita breaks down the dimensions of trust we have to have in God, and the things we have to trust about Him, before we are able to trust Him with our careers.

I was talking to a friend about dimensions of our relationship with God. We were talking about the difference between receiving Jesus as Savior, and receiving Him as Lord. Many of us have no problem acknowledging Jesus as the Savior of our life, but we can be in relationship with Him for years and never allow Him to be Lord in our life.

For many, whether we acknowledge or even realize it or not, we imagine a gigantic gap between the two, that can only be diminished by one thing: trust.

Our quest in this podcast is building harmony between faith, art, and career. Harmony is about coming to one mind with God. Let’s be honest: it’s about coming to God’s mind about things
About becoming one by seeing things as God sees them.
And that requires compromise.
It requires letting go of plans, perceptions, timetables.
It requires an openness to rearranging, restructuring, reframing, indirect routing.

And all of that requires trust. If you and I are going to have our faith, art, and career working in harmony, we have to trust God. But, you won’t trust God if you don’t know the God who asking for your trust.

I am a working artist myself. I am a choreographer and teacher. Even though I am doing this podcast and serving other artists, I still have desires as an artist myself. I want to do freelance work, setting pieces on major companies. And I was well on my way. I started my dance company, produced my show, was showcasing work and getting good feedback, opportunities were starting to form, relationships were being built, etc. Then God said I need you to focus on KAI. Huh? So, I had to lay my company life down for this season; but, the biggest thing I had to do was trust Him to lay it down. Now I haven’t completely abandoned my artistry. I’m still teaching
I’m still going to see shows,
I’m still taking class,
I’m still writing down the names of dancers I want to work with,
Still building relationships with people,
I still research choreography opportunities so I’ll be ready when God releases me.
I still make small phrases and record them.
But I have been asked to direct my energy to building KAI right now, instead of building dances.

This harmony and trust that I’m talking to you about is how I live. I live this; and my choreography is just one example. So, believe me when I tell you that I understand where, and how, it could be difficult for you.

Well, Marlita, how are you able to do that?

Like I said in the beginning, you can’t do this until you know the person asking you to do it. I don’t mean I know who He is, I mean you know Him.
Then you have to trust in who He is.

What do I mean by that? What’s the difference?

You have to know the God who’s asking for your trust. Who is this God? I’m not talking about Jesus, the light of the world, the Savior, the Lamb, the One who died for my sins. That’s important, that’s very important, but still not close to my everyday life. That’s why we can know that Jesus is our Savior, that He loves us, but still hold our daily life very distant from Him. That’s how we are so able to keep our art life so separate; because knowing Him as savior is very different than what we’re talking about right now.

Who is this God asking us to trust Him with our art career?

He is the God who put the gift in us in the first place.
He is the God who put the itch and eye for us to pursue a career in mainstream culture, instead of some other context. He’s saying: I’ve planted you, My children, as seeds in this world. You are out there because I’ve led you there, planted you there. So no, you’re not offending me. You’re not out of my will or disobeying My word by being there, because I have you there for a reason. And, if I put you there, why would I ask you to go against something I initiated in you? I’m asking you to let Me put My hands on it. Not to take it from you, but to walk with you, to support you in making sure it becomes all I have purposed it to be. Because I am after something bigger in you, and through you, than just your career as an artist. I need you to have a career as an artist, but that’s not all I’m after.

Two – you have to trust that He wants for you what you want. Your “secular” art career is not offensive to Him. He put you there, so He wants you to be there.

Three – you have to trust that He is able to get you what you want. It’s one thing for Him to know what we want, and to want for us what we want. That gives us some sense of safety. But, I also have to know He can actually do something about it. I have to trust that Lord, if I follow what You say instead of following industry standard, that You can back up what You’re talking about. Because this means a lot to me and you’re asking me trust you with something that I’ve made a lot of sacrifice for.

I personally fought for 12 years to get into a dance program. This is something that we dream about day and night, pursue with our whole heart. Some of us have moved from other states, left our families, almost went homeless. We’ve worked 7 weird jobs at a time just to create space to go on auditions and be ready when our time came. We’ve looked stupid and irresponsible in front of people, daring to believe that we could actually make a go of this. I’ve done all this Jesus and you are asking us to put it in your hands. I need to know I can trust you, that you know what you’re doing. I mean, would youyou’re your grandmother be your agent in a high stakes movie deal? No! Because she doesn’t know what she’s talking about; even though she knows you want to be in film, and she wants you to be in film.

It’s not enough for us to know that Jesus wants us in culture. We have to trust that He’s able to back it up and take care of us and our career out there if we do things His way.

So, we also have to trust in His willingness.

How do we know He’s willing?

Because He said so.

So, how do we walk in this trust? Some of you might be saying I want that so badly but I don’t know how to do that. Here’s where you start – you have to do like Mufasa told Simba: REMEMBER!

One of things that God was always getting on the children of Israel about, besides their nut crazy disobedience, was not to forget. God brought the children of Israel out of Egypt to possess the land He had for them, and live with them. But, that was going to take a lot of feats of faith. So, God was always stressing to them to remember what He’d done before, because that would help them build up the courage to do the next crazy move. And, He would get so mad because He was like: I did all this for you and y’all are acting brand new. Y’all are acting like you don’t know Me. How many of us have had that kind of conversation in a relationship? In Deut 7:17, He says…

If you should say in your heart, ‘These nations are greater than I; how can I dispossess them?’— you shall not be afraid of them, but you shall remember well what the Lord your God did to Pharaoh and to all Egypt: the great trials which your eyes saw, the signs and the wonders, the mighty hand and the outstretched arm, by which the Lord your God brought you out. So shall the Lord your God do to all the peoples of whom you are afraid.

Then, I want you to come see me in the chat! Tell me about it. What was that like for you?

Make a list of all the things God has done for your art career: all the prayers He’s answered, ways He’s made, favor He’s given you. Begin to say out of your own mouth, “God I trust you.” I want to know what that was like to recount your experiences and confess yourself that you trust God with your art life.