Ep 21 – Pressing into the Tipping Point 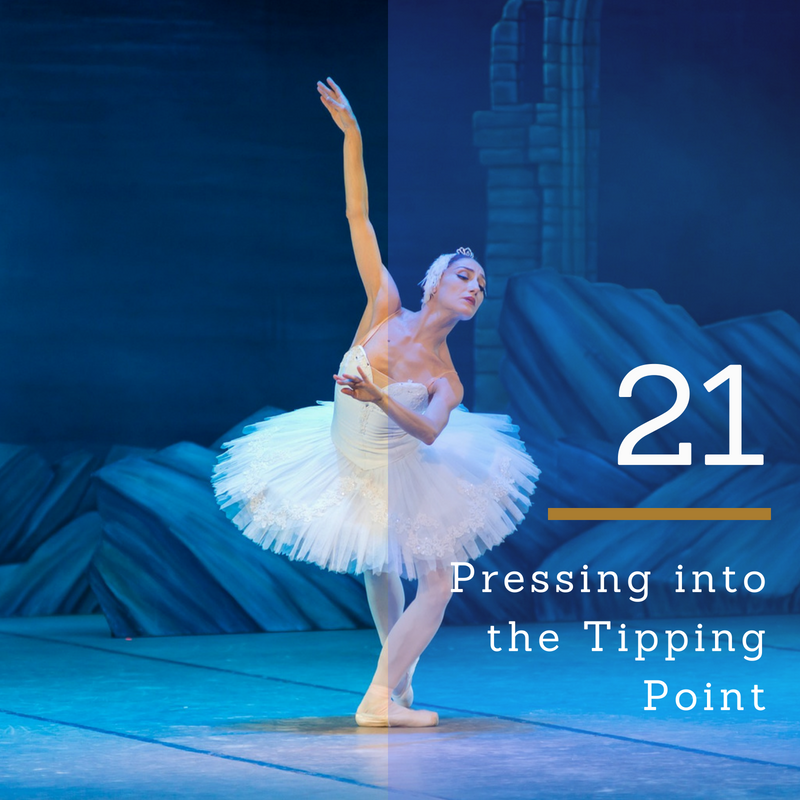 One of the most frustrating things about being an artist in Christ is the journey of attaining this visceral, tangible vision He’s given you of your career life. Inside of you, it is so vivid that you feel like you can reach out and touch it.

Then there are thoughts that come to your mind, things that God leads you to do, instructions that come with such a sense of immediacy, and such urgency that you believe the floodgates are going to burst open as soon as you do it.

So you do it … and crickets.

Then the next instruction comes, and it comes with that same immediacy and urgency. So you think maybe I was wrong on the last one but this one is going to be it.

So you do it … and crickets.

And you do this again and again until you get to the place where you start to doubt the next instruction. You start to doubt very seriously whether you’re actually hearing God talk to you.  And in this doubt, you start to get confused about what to do next, and agitated because that fricking visceral vision won’t go away.

So you feel stuck. I know this place. I know this place very well. I have been on this journey for 20 years and am only now beginning to see notable momentum. I remember the times when God would tell me to host a workshop and no one would show up. Then the very next weekend He would tell me to do it again and no one would show up. He would tell me to write this book and I did it, thinking my obedience was going to change the situations in my life. And I had several copies sold. I’m grateful for those but it was nothing like what I sensed was going to happen. Then He led me to write the next book and I thought that was going to be the one to shift everything. So I wrote it and it did even worse than the first one. I remember all of the videos that He told me to record and post that it seemed like no one cared about. I thought once people saw what I had to offer that they would invite me to their workshop and they would invite me to teach. None of that happened.

But then a funny thing started happening. It was me following instructions to record a dance to an excerpt of one of the books that I wrote (one of the ones that didn’t really sell) and email it to someone that brought me into the season that I’m in now and introduced me to the people that I know now. That one act of obedience ended me up in Spain and connected to whole new world of people. It was my diligence to continue making those videos that it seemed like nobody cared to watch that got me noticed by a young lady from the Salvation Army.

I work with her now and that relationship has opened a tremendous door and allowed me to connect what God has given me to so many artists. It was my diligence to sit down and keep writing the next book that gave me this KAI curriculum which I am receiving more and more opportunity to now take to more and more artists.

It was my persistence to keep doing the next thing God told me to do. And this wasn’t on account of any virtue of mine. A lot of times I just felt like I had invested too much time to turn around and I just I had no choice now but to see it through. Some of it was because I just didn’t know what else to do. If this didn’t pan out, I was screwed. So, it wasn’t that I was always virtuous and trusting of God.

I was talking to a young man last night about this very same issue. He was at the point of giving up because everything that he did to attain this vision he carried was not working, and he didn’t know what else to do. He began to doubt if he was even on the right track, if he was even hearing God at all. The Lord brought this verse to me for him and I want to share it with you.

He who observes the wind [and waits for all conditions to be favorable] will not sow, and he who regards the clouds will not reap. As you know not what is the way of the wind, or how the spirit comes to the bones in the womb of a pregnant woman, even so you know not the work of God, Who does all. In the morning sow your seed, and in the evening withhold not your hands, for you know not which shall prosper, whether this or that, or whether both alike will be good.

One of the conversations we are having in our KAI workshops is how do we pursue a career in a way that honors faith? To say it another way, how do we pursue a career in a way that honors the process and working of faith? Here in Ecclesiastes, we get a key to what the process and the working of Faith looks like. And here’s what it looks like: there are times when God will lead you to do something and it will not produce the results you think it will produce. And it will not produce in the timing you expect it to produce, yet He expects you to continue doing the next instruction and not be impacted by your disappointment in the lack of results. This is because the bottom line is that there will be results but the way those results are attained are different than what you expect. They are different in timing, they are different in method, and they are different in form.

I want to encourage you today to keep sowing your seed. Keep taking the next step. Keep sending that next email. Keep writing that next book, that next song. Keep making that next dance because you do not know which one will be the one to break it all open.

Years ago, I got a chance to speak to a woman named Dr. Ann Stevenson, who wrote a book called Restoring the Dance. She encouraged me so much when she told me that her book was published for 10 years before it ever gained any notice or momentum. I was speaking to a man who told me about Tommy Tenney and his story. He told me that Tommy Tenney’s book, God Chasers, which is so ubiquitous to us now, was printed for 5 years before anybody ever cared about anybody named Tommy Tenney. He had written the book and it wasn’t really selling when a friend, who was supposed to speak at this large convention, got sick and asked Tommy to take his place. Tommy took his place and guess what he taught at that large convention: God Chasers. And he sold 20000 copies of his book in one day.

Malcolm Gladwell calls it the tipping point. And the key is you have to stay in it until you get to your tipping point, because you do have a tipping point. Viola Davis was an established actress for 30 years before she ever got an Oscar. And despite all that she accomplished, she attributes her role in one movie, The Help, that shifted the trajectory of her career. Tyler Perry wrote 18 plays, many of them were nobody showed up, before his work ever took flight. And there is story after story after story of people with the same experience.

I know you’ve been doing it for a long time. I know that you’ve done things and it hasn’t worked. But I need you to get out of the conversation of whether your career is going to become what you see in your spirit. That needs to be a done deal. The whole reason you see it is because it already exists. You are just doing the work of bringing it from where it is to where you are. So I hope this encourages you today. I need you to keep sowing the seed because you don’t know which seed is going to be your tipping point. You don’t know which instruction, which act of obedience is going to blow the whole thing open for you. And I would be devastated for you to be one instruction shy of your tipping point, to have put so much work into this and never reach where you’re trying to reach — because you just stopped.