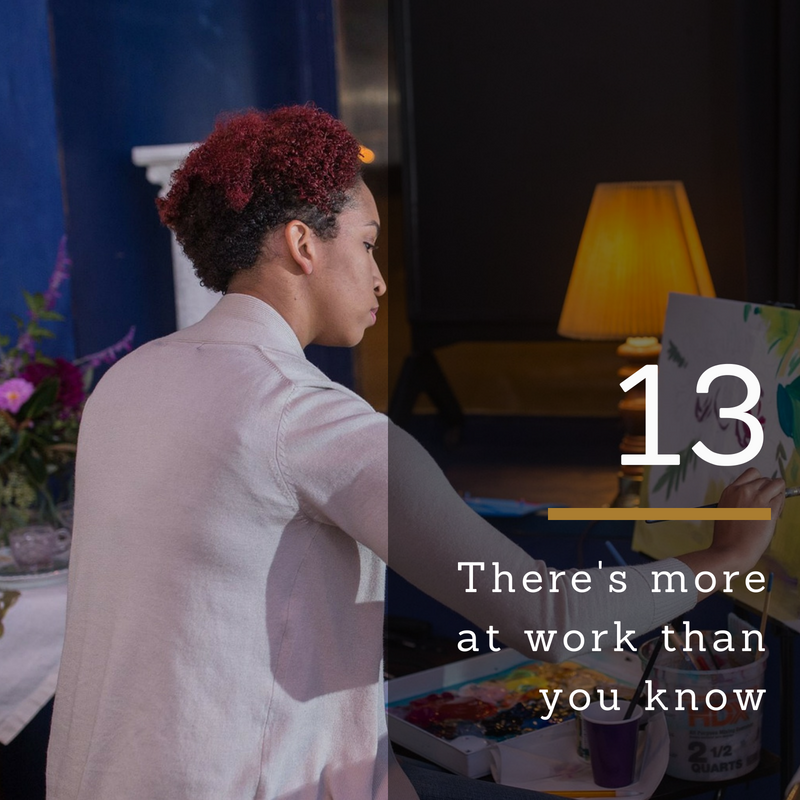 Episode 13:
There’s more at work than you know.
One of the most difficult parts of walking with God is waiting. Marlita speaks to the frustrations that come with waiting for God to bring a promise to manifestation.

One of the most difficult parts of walking with God is waiting. Well, truth be told, waiting is hard whether you’re a Christian or not. But it can be especially hard as a Christian because the waiting comes with a little disorientation caused by the unusual way God brings things together.

Here we are, artists, carrying this vision of what we want our career to look like, who we want to work with, what credits and awards we want in our bio, and the kinds of projects we want to be part of. And its good. And its God.

We look at our career ambitions and we know the steps that should get us from point to point. We are professionals. We’re educated in our craft. We have industry know how and experience. So, the steps and results to what we envision are obvious. And yet, when we move on those obvious things – nothing seems to budge.

What I want to encourage you in today is that those seasons…all of them…are connected. And they’re all moving you forward. But I want to focus on the frozen molasses season. And I’ll start with a story.

So, I’m an author.
I write about art and faith.
I have two books about dance and faith.

When I published the second edition of my first book, the Lord led me to propose my book to Christian colleges with dance programs for their dance ministry courses. So I got to it. I researched the programs, found out the dance ministry class professors, got their contact information, wrote my email and sent them off. I thought that because God told me to do it, and I did it, that something was going to happen immediately.

I sent out about 15 emails.
Only four responded. But they responded quickly and were really interested so I was confident things would be moving forward quickly.
I sent them a desk copy.
When they received it, they said thank you.

Then there was nothing.

When I published my second book, I again sent an email to the four who responded about the second book.
I got a response from them, but nothing moved forward

It was a little over 2 years after sending that first email before I got to work with one of them and I ended up doing a 10-day residency at their college. I was having a conversation with the chair of the department, and we had a wonderful moment of honesty.

I told her I was so anxious to get there and how it was rough waiting for 2 years; but now being here, I realize I wasn’t ready for them two years ago, even though I wanted it so badly.

And then she blew my mind with her response.

She said Marlita, we weren’t ready for you two years ago. Our program was not what it is today. Our dancers were not at the place where they could receive what you have back then, like they are now. We were a different program two years ago.

In that response, a whole new understanding was opened to me:

The reality is the one thing we want, and are so focused on, is part of a bigger ecosystem that has lots of different parts and factors that have to get into place before the thing we want can happen.

“…from the first day you set your heart to understand, and to humble yourself before your God, you words were heard.” And if you know the account, the angel came up against the prince of Persia and had to get backup from Michael. But the point is that from the day Daniel asked, the thing He asked for was dispatched.

But all Daniel knew was that it didn’t feel like his answer was coming, that it took 21 days.

He didn’t know why it took 21 days.
It was because there were other things that needed to be resolved before his answer could reach him… but it was on its way to him from the moment he asked.

What I have realized in walking with God is that He will give me a vision for an outcome, like that my book will be used as a textbook in colleges.
And then, He’ll have me start doing things toward it.
Some of them seem random,
some of them seem spot on,
some of them feel like a waste of time when I do them because I get nothing…crickets.

Then there comes a moment,
after a season of obeying Him in those things that seemed sometimes random,
after a season where I had, basically, given up on the thing I was pursuing because I felt like I missed the mark or that it just wasn’t going to happen because it was taking so long,
but there comes a moment where the He tells me to do something and it is just effortless.

The very same thing I had been banging my head trying to make happen suddenly (I say suddenly with quotations because that’s how it feels) suddenly, it’s like I just walk into it through a wide open door with plenty of room on both sides, in the most ridiculously, effortless way.

I had given up trying to get to that college, but I just had the desire to get to know her. I felt led to reach out to her one day and I just wanted to ask her if we could have a conversation. I really wanted to teach at the college, but I was also genuinely interested in what she was doing.

So, I reached out to her and asked her if we could just have a conversation. And do you know – that was the conversation where she asked me to come do a residency there.

The point I’m getting at, family, is that there were things that had to get into place before what God told me to move on could happen. But from the time I sent that first email, from the time I took that first step of faith, things started moving.

And what did I do over those two years?

I just kept doing what God led me to do.
I kept writing.
I kept researching.
I kept dancing.
I kept choreographing.
Even when I felt like none of it was going to amount to a darn thing, I just kept moving in what I knew to do.
And let me tell you, it wasn’t always easy, because I didn’t know then what I know now. Now I know that time is just an unavoidable part of the cycle. And I will have you know that my book is in its first college…some three years after that first email. But it’s in there.

The career you carry in your heart is happening.
Right now.
It’s happening.

But the individual landmarks, the singular things you want are part of a bigger ecosystem. People need to get into place or be removed, things in you need to mature or be removed, situations have to adjust, events have to occur, first; because there is more at play than just the single thing you’ve asked God for. Better yet, the single thing you’ve asked for requires several steps before it can happen.

It’ like getting money out of the ATM. You just want money. But several things have to happen, first, before the money is in your hand.
You’ve got to get in the car,
drive to the bank,
stand in line,
put your card in the machine,
push some buttons,
and then the money comes out.
Well..then you have to grab it, and then it’s in your hand

But from the time you stood up to get in the car to go to the bank, you were getting money. Same thing with your career.

So don’t get caught up in what it looks like. Be confident in the God you serve and in His commitment to bring you all the way into the good things He’s prepared for you, and the beautiful things He’s Placed in your heart.

I want to leave you with this verse from Ecclesiastes 11: 4-6, from the NIV:
Whoever watches the wind will not plant;
whoever looks at the clouds will not reap.
As you do not know the path of the wind,
or how the body is formed in a mother’s womb,
so you cannot understand the work of God,
the Maker of all things.
Sow your seed in the morning,
and at evening let your hands not be idle,
for you do not know which will succeed,
whether this or that,
or whether both will do equally well.

I hope that encourages you to keep moving forward because things are coming together for you!

What’s it been like walking this path of patience for you as you manifest your career? What’s kept you moving forward? Any verses you stand on or promises from God?

What has it been like walking through your season of patience? What scriptures, promises, or words from the Lord have kept you moving forward?