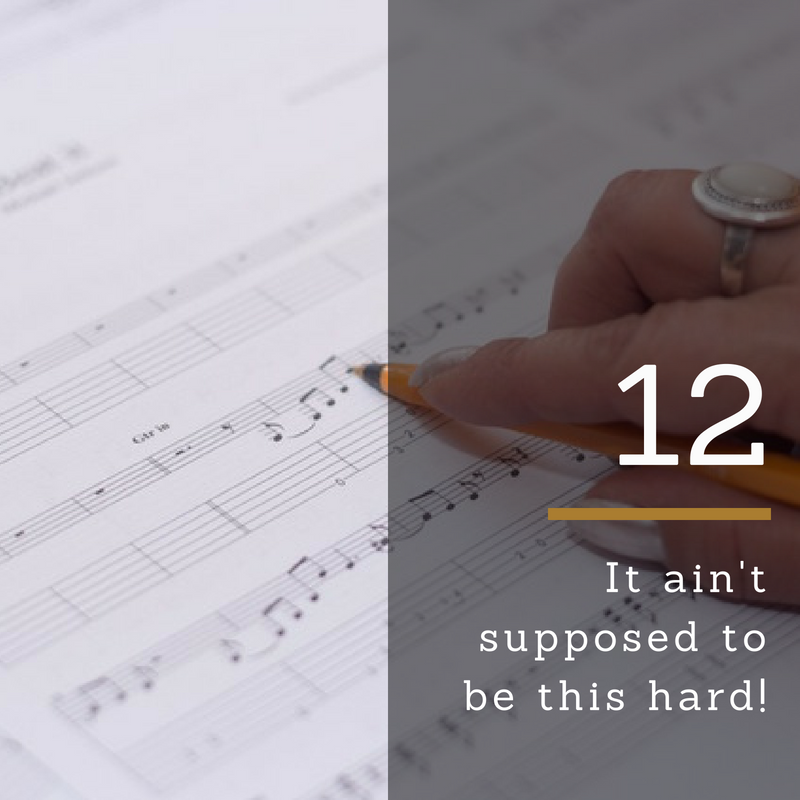 Episode 12:
It ain’t supposed to be this hard!
Hebrews 4:9 tells us that we should endeavor to enter God’s rest. But, grinding and hustling are part of being an artist. Marlita explores how these two ways of being work together by looking at what rest looks like as a Christian, when you’re on the career grind as an artist.

Over the last couple of weeks, the Lord has really been dealing with me about rest. I’m not talking about taking a rest. I’m talking about pursuing in rest. This is important for us to know in our conversation here on this podcast because, as Christians, we are told to endeavor to enter this rest of God in Hebrews 4:9. But, as artists, pursuit and grinding and sacrificing and toil – these are just everyday business for us. We’re always pursuing to get the next gig, tour, fellowship, grant, film, etcetera.

To answer this, we have to consider a couple of questions; the first of which is, whose responsibility is it to make that career happen?
Philippians 1:6 says that God is faithful to complete the good work He began in us.
Psalms 57:2 talks about God who performs all things for us.
And Psalms 138:8 says that the Lord will perfect or mature that which concerns us.

Now this doesn’t mean that we don’t have to do anything. Still, there is a difference between ultimate responsibility, and responsibility for just doing your part. We do have to participate in accomplishing our dreams, but us getting there is ultimately God’s responsibility. It was initiated by Him, and it will be finished by Him. He’s the one who put the original desire to pursue that career in your heart, and He gave you the vision of what that career should look like.

Okay marlita, but what do you mean by him? I’m the one that’s out there doing the auditions. I’m submitting my work for adjudication. I’m sending in my resume. I’m working two jobs to pay for headshots and staying up into all hours of the night editing film clips. So, what do you mean by him?
And that’s a fair question.
So, I’m going to insert a word in there for clarity.

Proverbs 3:6 says, “In all your ways acknowledge God, and He will direct your path.”

You see fam, this is where we get it twisted, and where we have to renew our minds. We don’t take advantage of the benefits of covenant. We pursue our careers like we’re on our own; as if God showed it to us, made us excited about it, and then left us to stumble in the dark trying to make it happen just hoping we land on something.

But, that is not the good God we serve. We enter into this Hebrews 4:9 rest by understanding that our “grind” should only be done in following His leading. It’s not that we don’t have work to do. It’s that the work that we do should be according to His instruction and His timing.

See, we’ve been talking about rest in this episode, and how we rest as we pursue career goals.

Now, tell me: is it more restful to be the one who just has to show up, find out what your part is, do your part, and go home? Or, to be the one who has to do all the coordinating, to coordinate all the permits, all the schedules, everybody’s tasks, to fight with the city, to figure out the parking, etcetera?

God is saying to us I am the coordinator.
I’ll handle all the all that mess.
You just show up, get your tasks, do your part, and then head back to the house.

The other thing to consider is arrival. To me, and this is just me and I may be wrong, if God gave you the vision and your moving towards it, you’re going to get there whether you follow His advice or not.

But, the bigger issue is what condition will you be in when you get there? Will you be tired, worn out, bitter, hurt, manipulated, needing healing from trauma?

Or, will you arrive fresh-faced, sunkissed, well-rested, excited about the world before you.

And how long will it take for you to get there? You know it was not supposed to take the children of Israel as long as it did for them to go through the wilderness and get into their land. It was something ridiculously short. It’s been a while since I studied it, but I think it was something like a few weeks or a few months.

Note: It was only supposed to take around 11 days)

It wasn’t supposed to take 40 years, but that was their choice because of how they acted.

So, the Lord tells us that we are to be mindful to enter His rest; that we are to have a disposition of rest as we pursue the things that He has placed on our hearts. We pursue that rest by following His leading.
You are not out here on your own.
You are not an orphan left to fend for themselves trying to find a way.
And the first part that we have to play is to stop acting like that, and tap into the help that we have available.

And be warned, the instruction that He gives you is not going to look like what you expect it to look like, but do it anyway.

So here’s a quick story to demonstrate a little bit of how this works, because this is how I live.

In 2011, the Lord told me in four years it would be time to leave my job. Two months after that, my pastor prophesied over me, and said that, in about four years, the Lord would begin to call me all over the place – particularly to Europe.
I don’t know anybody in Europe.
Didn’t know how I was going to get to Europe.

In 2015, I had just published the second edition of my book. The Lord led me to an excerpt from it.
He told me to narrate it.
He told me what song to put it to.
And, He told me to go into the studio, make a dance to it, and record it.
Then he told me to start reaching out to other people in the faith and art community and, when I did, to attach my video.

I started researching other people in the faith and art community and I was led to reach out first to this one particular gentleman. I sent my email on a Wednesday. It was actually February 4th, 2015. I sent the email to this guy on a Wednesday. What I did not know was that he, and this other woman, were supposed to do a chapel at Biola University on that Friday. He is a visual artist. She is a storyteller and they were supposed to do this chapel with a dancer; but the dancer had to drop out for some reason. So, they were looking for a dancer when I sent him my email with my video attached.

He shows this woman the email and she says, yes! ask her if she’ll come. He emails me back and invites me to do the chapel with them. I don’t know these people, but I felt led to say yes. So, I did.

I show up to the chapel. I meet them for the first time. We do the chapel. It was a God connection. Next thing I know, a year later this woman invites me down to San Diego where she asks me if I would pray about being part of the team in Spain. And I remember I asked her is Spain in Europe?

She told me to pray about it and I knew that Spain was in Europe, but I was making a point. She looked at me kind of funny and she said yes. I said Well, I don’t have to pray about that. I know what God said.

One more before we go.

There were about 4 people out of 15 that responded. But, there was one woman that I just felt particularly led to and we corresponded. Over two years, nothing happened, and then I just felt led to stop pursuing and just get to know her. So, I got to know her a little more over social media.

September, we have a conversation and she says I want to bring you out to Belhaven University. I go out to Belhaven.
I do a 10-day residency that was amazing.
The Lord tells me what song to do.
I was thinking I would do another song but He said no, do this one; so I did that one.
I became really good friends with the faculty.

One of them was trying to move out to LA and he ends up working at a college here. Because he loved the work that I did – that the Lord told me to do – he raved about me to the people at the college that he now works at, and now I have two years worth of work with them.

What pressure does it relieve for you to know that you don’t have to coordinate and orchestrate? That all you have to do is quiet yourself long enough to hear and just move on what you hear?